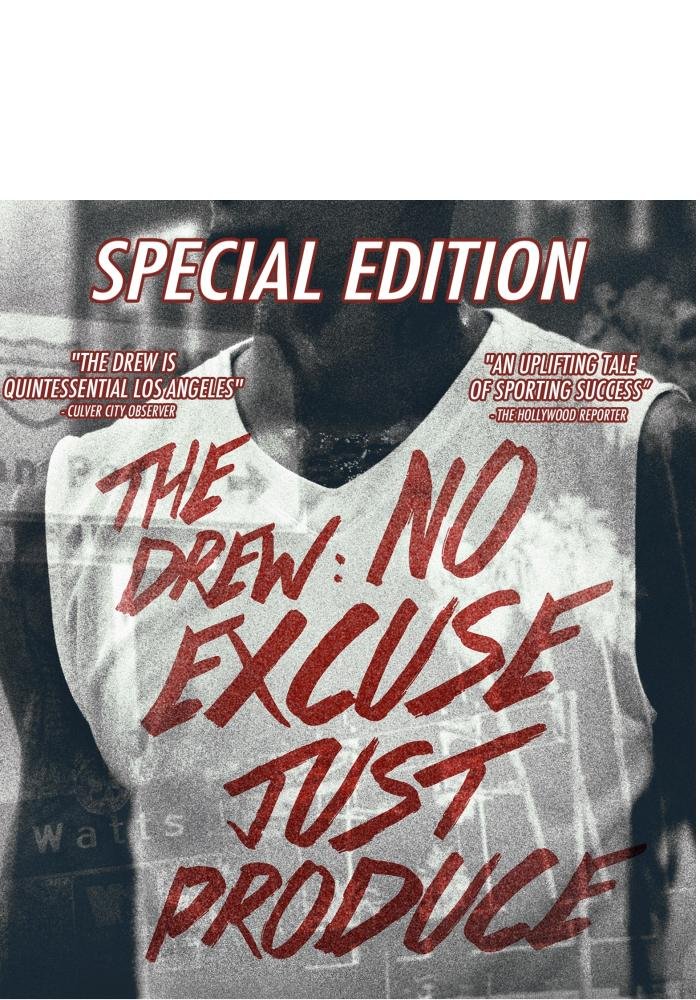 The Drew: No Excuse, Just Produce - Special Edition 1973. The predominantly African-American community of South Central Los Angeles carries the burdens of crime, poverty, an escalating gang population and dwindling opportunities for its youth. In response, a young man named Alvin Willis formed a six-team competitive basketball league at Charles Drew Junior High School. It was an outlet for himself and his friends that became known as the Drew League. Or, more affectionately, âThe Drew.â Its motto? âNo excuse, just produce." More than just a place to play ball, the Drew League provided a safe haven for kids and young men seeking refuge from the negative influences around them. The Drew quickly became neutral ground: whatever gang affiliations players arrived with were left at the gym doors, and whatever violence occurred outside its walls never penetrated. The residents of South Central nurtured this local treasure as a counterweight, helping balance the scales against darker paths more easily found. In 1983, after more than a decade in charge, Willis stepped down as commissioner, passing the torch to his longtime protÃ©gÃ© Dino Smiley. A resident of South Central himself, Smiley grew up around The Drew, filling every odd job from waterboy to scorekeeping. Eventually he would run a team of his own. Over the next thirty years, The Drew persevered through social, logistical and financial instability, a testament to force of will and the power of family: Dinoâs own, including his wife and children, as well as the extended family that formed around the league â fathers, mothers, brothers, sisters, cousins and more were all woven into the tapestry of the league as players, fans and volunteers. Still, the pressures of running the league took their toll. Year after year, it became tougher to consistently find the funding and resources necessary to make the league work, and by 2010, Dino had to consider shutting it down â that was, until the NBA unintentionally provided The Drew its greatest opportunity. During the lockout of 2011, the Associationâs best pros needed a place to stay sharp. Having long served as a talent incubator for local pros from Byron Scott to Baron Davis and James Harden, The Drew threw open its doors to the greatest basketball talent in the world, as Kevin Durant, LeBron James and Kobe Bryant joined dozens of peers, hooping in South Central. All eyes were on Los Angeles, and, as it had for decades, The Drew produced. THE DREW: NO EXCUSE, JUST PRODUCE documents the unlikely story of a Los Angeles institution, celebrating the value of basketball, persistence, loyalty, family and, above all, community. The power of sports meets the power of people. Directed by Baron Davis and Chad Gordon. Produced by Baron Davis, Ali Brown, Chad Gordon, Paul Hunter, Stefan Sonnenfeld, Erikka Yancy and Gus Roxburgh. This Blu-ray features bonus materials including "BD Talks Drew," "Free Throw," "Lebron Shows Up," "Metta Shows Up," "Swag Champ," "Hey You," "The Way Things Were," the official THE DREW: NO EXCUSE, JUST PRODUCE trailer and English subtitles for the deaf and hearing-impaired.

HelpGuide helps you help yourself

HelpGuide is a small independent nonprofit that runs one of the world’s top 10 mental health websites. Over 50 million people from all around the world turn to HelpGuide each year for trustworthy content they can use to improve their mental health and make healthy changes.

Laughter is the Best Medicine

Online Therapy: Is it Right for You?

How does HelpGuide help you?

We offer the guidance and encouragement you need to find hope, get motivated, take charge of your mental health, and start feeling better.

We highlight what you need to know to help yourself.

We focus on what you need to know to understand the challenges you face, make informed decisions, and take positive steps.

We don’t accept advertising, sell anything, or answer to corporate sponsors. The result: a better online experience and integrity you can trust.

Our mission is to empower people with information they can use to help themselves and their loved ones. HelpGuide is an independent nonprofit that provides free mental health education and support.

HelpGuide is proud to be recognized as a transparent and trustworthy nonprofit provider of quality health information.

HelpGuide is dedicated to Morgan Leslie Segal, whose tragic suicide might have been prevented if she had access to better information.

HelpGuide is dedicated to Morgan Leslie Segal, whose tragic suicide might have been prevented if she had access to better information.

A guide to symptoms, treatment and recovery for BPD

Changing your habits to avoid anxiety, depression, isolation, and FOMO

The exercise prescription for depression, anxiety, and stress

Best Friends: You and Your Dog

Coping with Grief and Loss

Understanding the grieving process and learning to heal

Subscribe to our newsletter for mental health and wellness tips, news, and our latest articles and resources.

Articles and meditations to help you manage your fear, stress, and anxiety during this deeply distressing time.

Give the Gift of Hope